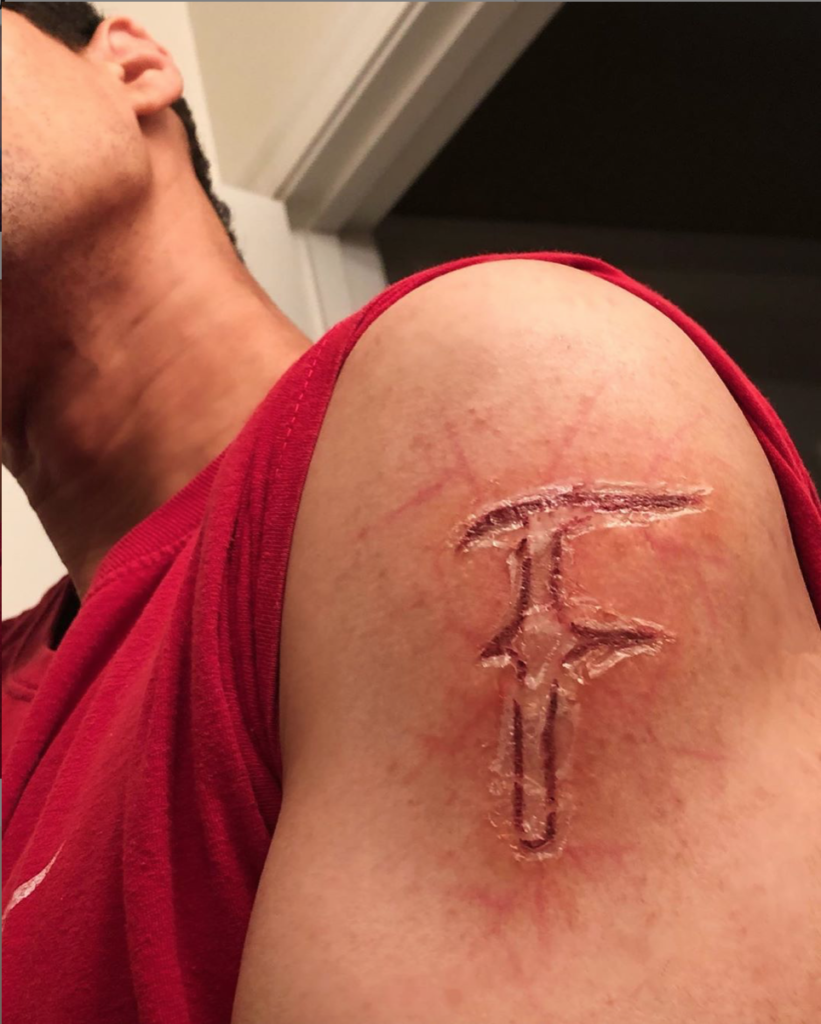 Hello, Rise of the Fay followers!

I wanted to take the time out of my day to discuss Alec Everly’s branding. Within the Rise of the Fay novel, Alec Everly comes in contact with a brutal and notorious gang called Los Furiosos. Little does Alec know that Los Furiosos have a hidden connection between his brother Colden Everly and his father Samuel Everly. During Alec’s first encounter on Candelario island, I wanted to signify how barbaric Los Furiosos’ loyalty ran. Every individual under control on Candelario is branded with Los Furiosos’ secret mark that is only worn by its members.

I wanted Alec to become apart of them but also… not part of them. The branded F on Alec’s shoulder came across to me as a mear barcode or label that he was now officially associated with Los Furiosos. However, with Alec’s quest to escape Candelario and with his infamous nickname Los Furiosos gave him as the ‘Faerie’. I wanted to not only tie Los Furiosos to Alec forever but also allow Alec to give the brand a new meaning that was in his image. The title of the book is called Rise of the Fay for a reason and if you weren’t aware that the term Fay is just another shorten term for the old folklore use of the word Faerie.

Alec soon understood that anyone with Los Furiosos’ secret mark was an individual that should never be messed with. Given Alec’s hidden talents and abilities, I felt it was necessary for him to live up to Los Furiosos’ reputation but on the side of good instead of evil. Giving the brand a new meaning when it came to his reputation of becoming the Fay.

Throughout the first novel, the term Fay is never brought up by anyone and there is a huge reason for that which I can’t reveal who or what labels him as the Fay. A pivotal moment in Alec’s life will eventually make him see that Los Furiosos is known for being evil and vicious, which makes Alec aware that he to has become something just as bloodthirsty and ruthless as they are. A special someone will inevitably give Alec insight, reminding him that he is not a product of Los Furiosos but has risen above them and redefined his branded scar forever. However, that person will remain unknown unless you continue reading the series 😉

These books were written by me with every intention of it becoming an epic story. One that I feel the LGBTQ+ community lacks to have in the world of books, movies, tv shows, etc. I intended to create a character that I always wanted to read about as a teenager because the heroes that I’ve watched on television and movies always got the girl in the end. And for once, I wanted to produce a character that wasn’t your average superhero. The novels and comic books I’ve stumbled across in the past have always labeled an LGBT character as a cookie-cutter hero who wore spandex and fought with dildo’s and used sexual innuendo remarks. I wanted something dark, evil, scary, life-threatening and true. For once I wanted to have a character like this to BE the center of the story. I want everyone to see that we have thrilling and incredible obstacles to overcome just like everyone else.

Placing the story in a futuristic time frame allowed me to give Alec a fighting chance. An era that is fresh and unknown while technology consumed the world at a rapid rate. Some may have found that the implants were a little much, but come on… if there was an implant out there that allowed you to control the technology around you hands-free… I’m certain you would sign up too. As of now, we live in a world where technology divides us and we’ve become dependant on it. We rely on our google maps to lead us to where we are going. We place an order for food with the touch of a button. We use dating apps to find the love of our lives. We send text messages because calling someone is weird and foreign nowadays. We have become so DIVIDED!

Rise of the Fay was set in the future but I wanted Alec to feel primal and vulnerable because he didn’t rely on much technology while navigating the deadly terrain of Candelario Island. Using an ax as a weapon to fight off mind-controlled men gave me a creepy vibe because I could see it vividly as I wrote it. The Capitol Optic implants were important because it’s a gateway into cultural appropriation. A product that everyone has to have because it would make them fit in and grow with the times.

Alec’s branding was something I saw as unusual and outdated within a futuristic world like this. Combining old rituals with contemporary technology was very complimentary in my eyes because as we evolve technology-wise… we lose the sense of the olden times when using a compass was the only tool for navigating, along with relying on the sun as a form of direction has become lost in translation because of gadgets we have today. The branding of Alec is a mark of who he has become and what he will evolve into in the future.

I hope that this made sense while I babbled incoherently. Thank you for reading about Alec’s branding and how it will forever change him in the near future. Please stay informed because Rise of the Fay will be returning shortly and I can’t wait for you to read what is coming next. I know I have been MIA for a while but that is because I have been working on some new content for the series. I wanted to expand on character development within the series so I have decided to do so with mini novels that will go hand in hand with the first installment of Rise of the Fay.

The mini-books I am working on pertain to the first book which primarily focuses on what is going on in the background while Alec Everly is fighting for his life on Candelario Island. The mini-books will focus on the lovers within the series and to be more specific that will include: Liam Brooks, Colden Everly and a new character that made a small appearance at the beginning of Rise of the Fay and at the end named Catalina Quebal.

What do you guys think about mini books involving the lovers within Rise of the Fay?

Would you be interested in hearing Liam’s point of view or Colden’s? What about the unknown character named Catalina?

What do you think about Alec’s branding?

Let me know in the comments below 🙂

Thank you so much and happy reading ^_^